So, You are looking for the BEST NOODLES in Sydney. Here are some of my favourite noodle joints in Sydney from different culture and style.

An Indonesian cafe serving up aesthetically dishes and drinks with flair, of course this place will be on my list because ‘Mi Goreng’ is a staple to the Indonesians and also broke students.
At Kusuka Cafe they don’t just serve the plain Mi Goreng, they mega sized it and loaded it with the classic luncheon meats, eggs, greens, fried chicken and/or spicy homemade sauce. #Kusukacafe

China’s lovable TV Host Mr Meng has opened up his franchised restaurant  of Chongqing Cuisine to Sydney, hidden inside Market City in Chinatown. My favourite are their potato noodles, best one in Sydney so far.   #Mrmengchongqing 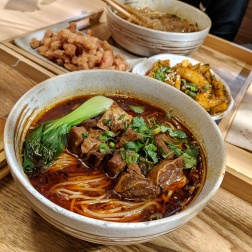 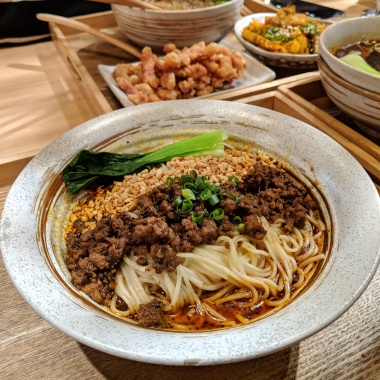 Burwood is known for their variety of Chinese Cuisine in one area, one style is the ‘Shaanxi Cuisine’ which is located in Xi’an province of North Western of China. Famous for their wide ribbon noodles aka Biang Biang noodles, dressed in their vinegary and chilli sauce and accompanied with meats and vegetables. #XianeateryBurwood 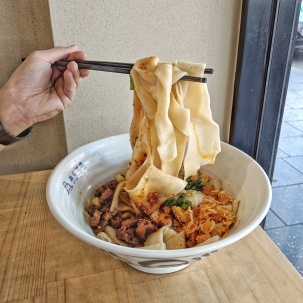 Arguably one of the best ramen in Sydney that is closes to what you get in Japan, it’s so good that they sold out of their noodles/broth early. Famous for their Tonkotsu broth many say it is salty … that is if you are not used to it. Order the special ‘Half and Half’ it is an off menu which is half Tonkotsu broth and half Miso Broth, this allows the mixture broth to be less salty with a bold ‘UMAMI’ miso taste. #Ryoramen 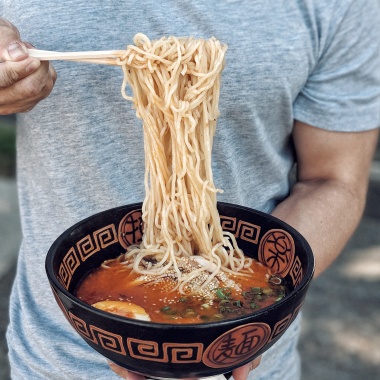 Another Chongqing noodles that needs to be mention is the ‘Chongqing Street noodles’ with a logo of an old cat lady. You may have seen a few around Sydney, like in Burwood, Chatswood and now they are in Sydney CBD – Town Hall area. Handmade flour noodles with spicy stewed soup and chilli sauce. #chongqingstreetnoodles 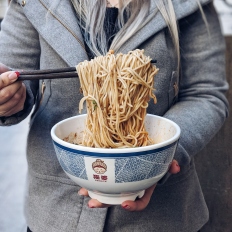 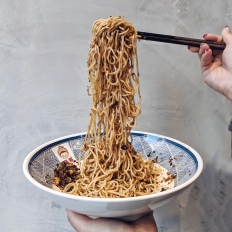 One of the most busiest Chinese eatery in Sydney CBD for lunch and it’s not because its cheap. The food taste good and is always consistent along with the service, you can see them making noodles and dumplings through the glass walls to showcase their skills.

You can you see people queue up for lunch time everyday without fail, so get in early or else you will be waiting in line. #chefsgallery #chefsgallerysydney 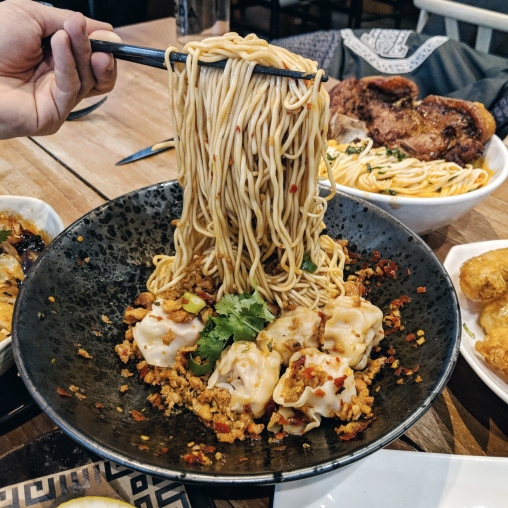 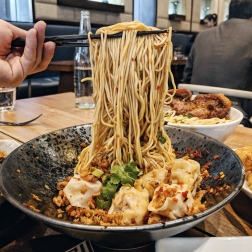 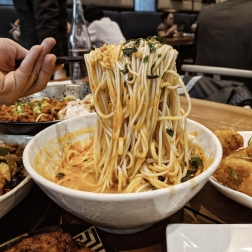 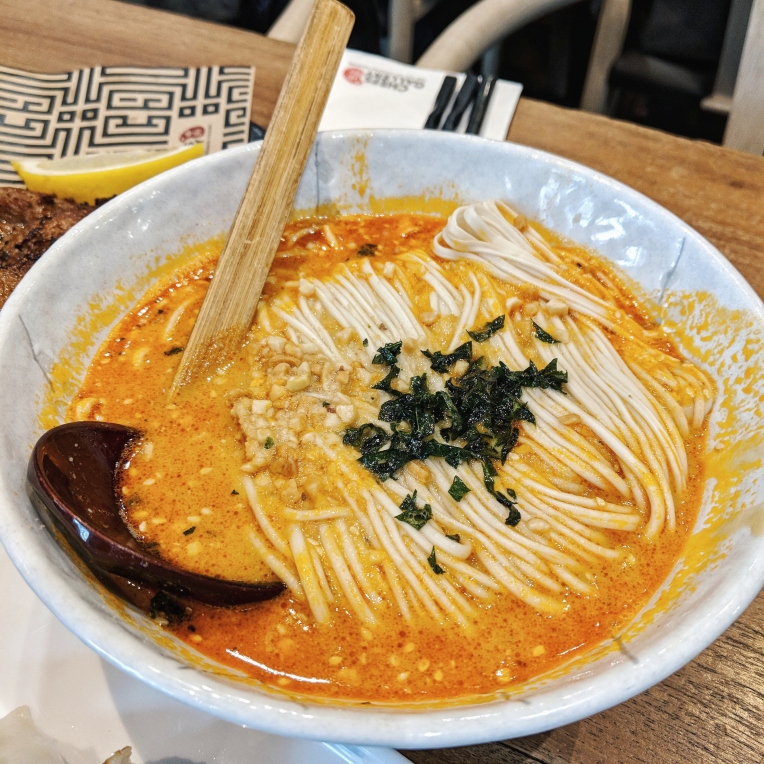 One of a few of China’s famous noodles the ‘Biang Biang noodles’, thick cut ribbon flour noodles with their special spicy chilli oil. Served with greens and meat, depending on selections. located upper side of Chinatown ‘Dixon st’ this place has been here a while serving old recipes from Xi’an province. 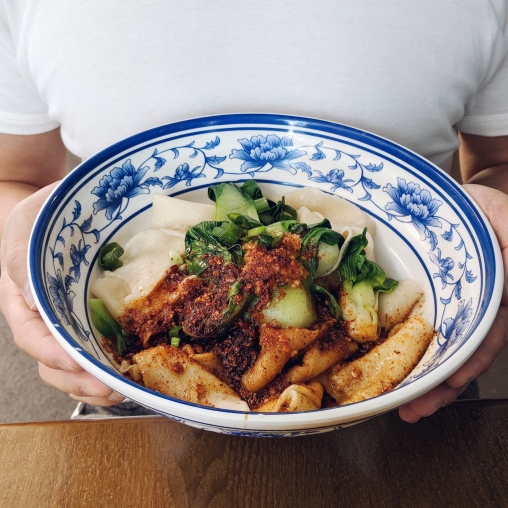 A new addition to the Burwood Chinatown Plaza this noodle joint has been busy since they have opened. Nice chewy hand made noodles with special blend of chilli and spices that makes this place very popular. What’s the difference? I can assure you, the noodles and the flavours are different … try it. They only have 4 types of noodles to choose from. 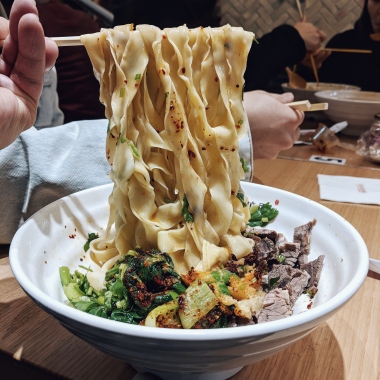 Legit a ‘Ghetto’ noodle joint that looks suspicious and random but i can assure you the food is nice numbing and spicy. A Chongqing street style cuisine.
You will see a few aunts running around taking your orders while yelling at each other and speaks very little English so you will need to point to what you want. Basically pick what looks good or tickles your fantasy. 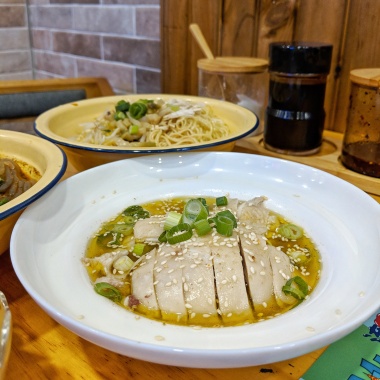 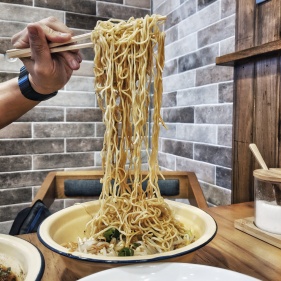 One of Sydney’s gem now living in Newtown has made a name of themselves with hard work and dedication. Famous for their ‘Baogers’ and ‘BBC – Belly Bao Chicken’ this place is great to hang out on the weekends with good vibes. Special mention to their ‘ Spicy Bao noodles’ which taste AMAZINGLY good!

This wraps up my noodle adventure, i need to find and try out new places to taste all the noodle types and style in Sydney. Until next time … Keep eating!!!!